The Autotransportes Andesmar company, since the very beginning, constantly seeks to provide quality services for its passengers. With this in mind, the company works constantly with the aim of providing a service of excellent service that also provides comfort and ease of the users.

The large number of destinations, allows the company to currently be the one that covers the most locations across Argentina, traveling forty-five million kilometers annually, and transporting approximately two million passengers a year.

Destinations and routes covered by Andesmar: 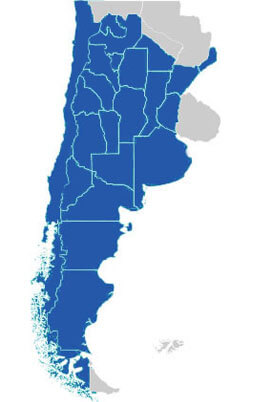 Andesmar is one of the companies with the largest number of destinations and routes throughout Argentina. Among the main destinations of this company are: within Buenos Aires, provides services in locations such as; Retiro, Tres Arroyos, Azul, Tandil and Bahía Blanca.
Also, it offers services in seaside locations and of great tourist popularity like: Pinamar, Villa Gesell, Mar del Plata, Miramar or Necochea. Within La Pampa: Realicó, General Pico and its capital city, Santa Rosa. In Córdoba, destinations such as: Río Cuarto in the south of the province and also Vicuña Mackenna. In San Luis, locations like: Villa Mercedes.
In Santiago del Estero, we can name the Hot Springs of Rio Hondo (las Termas de Río Hondo). In El Chaco, we can name its capital, Resistencia. Within the province of Misiones: Iguazú. In the province of Mendoza, Andesmar provides services to points such as: Tunuyán, San Rafael, Malargüe, Las Leñas (one of the most important ski centers in the continent) and General Alvear. Within Entre Ríos, destinations like, its capital Paraná.
Within Río Negro: General Roca, Rio Colorado, Choele Choele, San Antonio Oeste, its capital city, Viedma, and also the very popular tourist, Bariloche and El Bolsón. In the province of Chubut: its capital city Rawson, Esquel, to the northwest of the province, Puerto Madryn and also Comodoro Rivadavia. In the province of Santa Cruz, locations such as Caleta Olivia, San Julián and its capital city, Río Gallegos.
It also provides services in different points of the provinces of Corrientes, Catamarca, La Rioja, Neuquén, San Juan, Tucumán, Jujuy and Santa Fe.
Although this company is not only limited to Argentina, it has numerous (international) routes and destinations in the neighboring country, Chile; such as Santiago de Chile, Viña del Mar, Puerto Montt, Valdivia and Osorno.