On July 1973, Mr. Abraham Garber, Rafael Glamuzina, Jose Americo Lujan and Jose Nicasio Andino created the company EL COMETA S.R.L. . The company first tour was between the cities of Villa Angela (Chaco) and Gato Colorado (Santa Fe). After years and years of work, the company has always been in charge of fulfilling the service acquired provided to the whole area. After some years their owners decide to undertake another course and sell COMETA to the De Olivera family, who originally from Misiones, from the month of August of the year 1995 start to carry out this enterprise with great success. From October of that year, the union between the city of Clorinda, Formosa and the city of La Plata in the Province of Buenos Aires is achieved.

In the year 1997 the company starts a service from the City of Presidente Roque Saenz Peña (Chaco) and Retiro, in Capital Federal. The company was always characterized by providing an exceptional customer service. Continuing with the growth of the company, in 2009 a new service was acquired in the Province of Misiones, uniting Posadas, its capital, with the most important tourist city of Misiones; Puerto Iguazú, and El Soberbio, where the Mocona Falls are located, a truly special and beautiful place, thus achieving a great goal that is to bring people closer to some of the most visited places in Argentina. 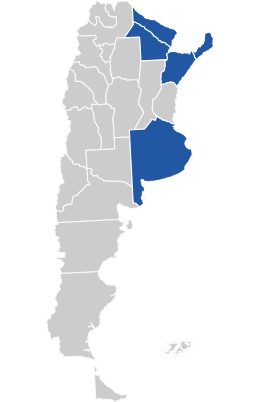